(Q) What are the dangers of pressure washers for ice dam removal? 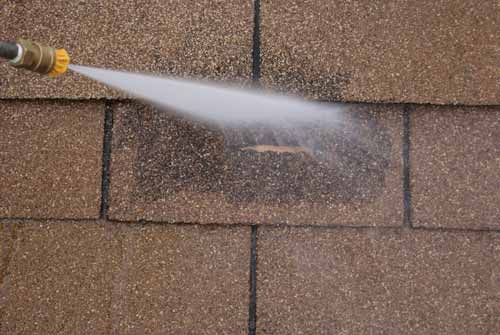 Here we will answer and discuss the common dangers of pressure washers for ice dam removal. Pressure washers are dangerous for many reasons so we will discuss some of the most important dangers in detail here. The three dangers we will cover are: 1) The chances for extreme roof damage 2) The chances for frost to destroy the building and surrounding concrete and asphalt surfaces 3) The dangers that the operator faces.

We will discuss the dangers of pressure washers for ice dam removal in more detail below.

1) The chances for extreme roof damage

Pressure washers are designed to clean with impact force, so the high psi spray (usually 1000-4000 psi) is abrasive. Imagine holding your hand in front of a pressure washer! It would quickly cut your skin. Now imagine holding your hand in the steam above a boiling tea kettle, it would not cut you but it would be hot. The same principal applies with pressure washers and steamers. Another good example would be this: A man getting hit with an ocean wave gets knocked over by the impact force, but a man cannot be forced over by fog in the air even if the fog is moving fast. You do not feel impact force from the fog/steam. Would you drive a car into a wave? No! Would you drive a car into fog? Sure! Many roofs have been damaged with the impact cleaning force of pressure washers as pictured!

2) The chances for frost to destroy the building and surrounding concrete and asphalt surfaces.

Pressure washers usually produce 3-5 gallons of water per minute. This water is literally soaking the areas around the building. This water can then freeze and expand. Frost heaving is common knowledge to most people and most are aware of its power to destroy! Adding excess water around a building in the winter is never smart. To remove ice dams with a pressure washer you literally need to melt a lot of the ice which adds even more water to the 3-5 gallons per minute. Compare this to a steamer (at 1.5-2.5 gallons a minute which is mostly evaporated in the machine) which can literally cut the ice into large sections and steam under it, freeing it from the roof. Huge blocks of ice can be removed. Practically the only water produced on your property from a steamer is from the melting of the channels and the undercuts, plus a very minuscule amount from the steam cooling as it goes through the hoses up to the roof. Most of the moisture is seen in the air in the cloud of steam around the user.

3) The dangers that the operator faces

Operating a pressure washer on an icy roof is very dangerous to the user. Unlike an IDSAFE approved steamer, a pressure washer has a trigger that traps pressure in the line. Once the user squeezes the trigger there is a sudden explosive jerk from the pressure build up. This sudden motion can cause the user to loose their balance and potentially fall off the roof or ladder. An IDSAFE approved steamer cannot be controlled by the user on the roof because the flow of steam is continuous. The steam gun has an open trigger, meaning that it has no restriction from a trigger. There have been many accidents from people falling off of ladders and roofs because of the burst of pressure from the pressure washer. The other dangers that the user will face are potentially loosing control and cutting themselves or the roof accidentally. The user of a pressure washer will also be considerably wetter due to the splashing of the water. Where as a steamer will not be subject to such moisture. The other big danger the user faces is ice forming quickly under their feet. Proper ice dam removal is all about temperature and a pressure washer cannot produce as high a temperature as a steamer. Therefore the roof will become icy much quicker and be more dangerous. The last thing you ever want to happen during an ice dam removal job is to see someone fall off the roof. Using a steamer provides a safer footing because it is hotter and there is less water to freeze underneath the feet of the user.

In conclusion we recommend avoiding hot pressure washers for ice dam removal on roofs by learning how to identify the correct ice dam removal equipment or by hiring our IDSAFE members. If you have further questions please contact us. We do our best to respond quickly.